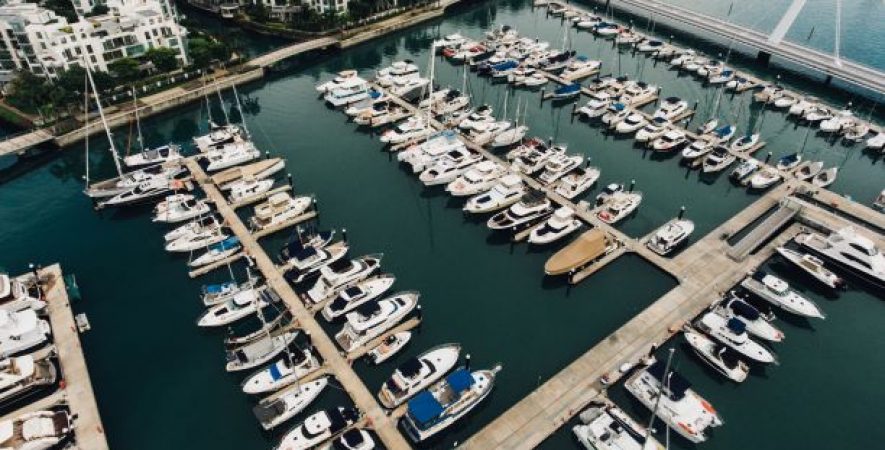 For some politically apathetic young Singaporeans, the key takeaway from the recent National Day Rally 2019 was the announcement of the Greater Southern Waterfront development, also affectionately known as the upcoming “Keppel Club BTO”.

That’s right! There’s going to be an HDB BTO in this uber-prime district. It’s pretty much going to be the next Pinnacle@Duxton; I bet tons of wannabe property investors are already camping out on the HDB website right now to find out when the balloting will open.

But the Greater Southern Waterfront is a lot more than that. What else is in store for this area? Here’s what we know so far.

Where is this Greater Southern Waterfront exactly?

Think of Greater Southern Waterfront (GSW) as Marina Bay plus 2 arms extending left and right. It ranges from Pasir Panjang and West Coast Park in the west, to Gardens by the Bay (East) in the east. The area also extends south to include Sentosa.

Even though PM Lee jokingly compared the Greater Southern Waterfront to Punggol, it’s actually not at all like Punggol.

The Pasir Panjang, Harbourfront and Marina South areas are already very developed, and it has a great deal of historic and economic significance.

In fact, the key development that is driving this change is that the historical shipping ports in Pasir Panjang and Tanjong Pagar are going to be moved to Tuas Port. This move frees up a huge area that’s ripe for redevelopment.

The Greater Southern Waterfront is said to be 6 times the size of Marina Bay, with 30km of coastline in total. (For scale, East Coast Park is only 15km!)

1. Keppel Golf Club will be redeveloped into 9,000 public and private homes

The Greater Southern Waterfront will be built in phases, and one of the earliest changes we’ll see is the development of the new “Keppel Club BTOs”.

For the uninitiated, Keppel Club is a golf / country club in Telok Blangah area. Its lease is expiring in 2 short years, and the government is already eyeing the site for housing purposes.

What got Singaporeans especially excited is that some of the estimated 9,000 housing units will be public housing, i.e. HDB BTOs. Now, it doesn’t take a genius to know that snagging a Keppel BTO is as good as striking 4D. Just ask those people who bought Pinnacle@Duxton flats for $450K and resold them for $1mil.

But, realistically speaking, it’s not likely that there will be many public housing blocks here. The land is way too valuable.

Look, even after you remove Keppel Club, this area is still an ah sia kia playground — there’s still the Marina at Keppel Bay where the 1% park their yachts and a bunch of luxury condos around here.

So the chances of it actually becoming a major public housing estate like Punggol? Sorry, but I think quite low lah.

Of course, the scarcity is only going to make people more aggressive about getting a flat here. There’s already talk about possible measures like longer MOP, higher resale levies and shorter leases to prevent another Pinnacle@Duxton fiasco from happening.

Although undoubtedly central, the Greater Southern Waterfront area is currently not very accessible by MRT.

Right now, the western side of the area is served by the Circle Line, with MRT stations Haw Par Villa, Pasir Panjang, Labrador Park, Telok Blangah and Harbourfront located along the coastal stretch.

By 2023, you would be able to access the eastern part of the Greater Southern Waterfront thanks to the Thomson East Coast Line. The stations serving the area are: Marina South, Gardens by the Bay and Tanjong Rhu MRT stations.

That still leaves the middle part of the Greater Southern Waterfront unconnected to the MRT network. For that, we have to wait until 2025, when the Circle Line finally becomes a real circle. The 3 new Circle Line MRT stations, Keppel, Cantonment and Prince Edward Road will fall smack in the middle of the precinct.

3. Brani Terminal will become a second Sentosa with “Downtown South”

Now home to the Port of Singapore’s Brani Terminal, Pulau Brani — which is a tiny shard of an island in between Singapore and Sentosa — will go the way of Sentosa, it seems.

Together with the rest of the PSA port terminals in the south, Brani Terminal will be relocated to Tuas Port. The land will be freed up for “new attractions” along the lines of Universal Studios on Sentosa, PM Lee said during his National Day Rally 2019.

One of the confirmed leisure attractions will be a “Downtown South” resort, basically an offshoot of NTUC’s Downtown East. Will the water theme park and chalets be replaced with a golf course and villas here? Who knows.

The plans for Pulau Brani aren’t new; the initial announcement was made last year.

In any case, the plans for Pulau Brani are not officially part of the Greater Southern Waterfront portion of the URA Draft Master Plan 2019 — so it probably won’t be ready in the next 5 to 10 years.

Meanwhile, Sentosa Island, which has been looking a bit lacklustre ever since the novelty of RWS wore off, is also set for some redevelopment.

Since 2018, there has been talk of how to improve Sentosa’s infrastructure and leisure amenities.

Already, there are 3 new hotels on the island: Village Hotel at Sentosa, The Outpost Hotel and The Barracks Hotel. But there are bigger things in the works too.

One of the confirmed new attractions is Siloso Green, on the site of the former Underwater World, which will house shops, bars, eateries and live music… in shipping containers. So yeah, even though we’re getting rid of the actual shipping containers in the city, we’ll see some fake ones soon!

During the NDP rally, PM Lee also mentioned that the government will “revitalise Sentosa’s beach areas and expand its nature and heritage trails”, which sounds a bit more in keeping with Sentosa’s heritage.

One of the changes we can look forward to in the coming 5 to 10 years is Pasir Panjang Power District, basically the 2 old power stations between Labrador Nature Reserve and the current Pasir Panjang port terminal.

Both power stations, which were built in the 1950s and 60s are now disused, are ready for redevelopment into a lifestyle destination, similar to its infamous counterpart, St James Power Station.

Earlier this year, the URA held a Power-Up Pasir Panjang! competition, in which the public could come up with ideas for the defunct power stations. The winner has not been announced yet.

Apart from Keppel Club and Pasir Panjang Power District, the final part of the Greater Southern Waterfront to make it to URA’s Master Plan 2019 is Mount Faber.

Despite its excellent location, Mount Faber doesn’t get a whole lot of footfall right now. So, One Faber Group, which manages the cable car attraction and businesses on Mount Faber, is currently considering a new “cable car” to bring people from the foot of the hill to the top.

In addition to making Mount Faber more accessible, this new ride also lets Singaporeans access the Southern Ridges, the stretch of parks and walkways that links Mount Faber all the way to Kent Ridge. If implemented, this should be ready by 2023.

The Greater Southern Waterfront is home to a surprising amount of greenery and nature. There’s West Coast Park and Kent Ridge Park in the western edge, Labrador Nature Reserve, HortPark and Mount Faber Park in the south, and Gardens by the Bay (South and East portions) in the east.

Fortunately for nature lovers, there are no plans to demolish these habitats to make way for new developments in the district. Instead, we can look forward to more trails connecting these green spaces.

The most noteworthy planned trail is Pasir Panjang Linear Park, which is a long stretch running along the soon-to-be-vacated Pasir Panjang wharves, linking up Labrador Nature Reserve with West Coast Park. This coastal trail could potentially be a second East Coast Park.

Another big development is URA’s planned waterfront promenade (think Marina Bay), which will line most of the western coast of the Greater Southern Waterfront. It might even be possible to run or cycle from Marina Bay all the way to Jurong via this promenade.

Finally, when the Rail Corridor reopens after development, part of it will run through the Greater Southern Waterfront. (The start of this linear park is the old Tanjong Pagar railway station, which is of course located near the historical Tanjong Pagar port terminal.) The old rail route then stretches all the way to Woodlands.